To spend time with Chip

Muffin "Muffy" is the late wife of Chip and a minor character from the 1998 film Antz. Generally, Muffy has one scene appearance and is notably a very minor character in the film.

She is voiced by Jane Curtin.

Muffy is seen only once when Z was in the picnic out of the anthill. She is seen alongside Chip until she got hit by a flyswatter. Muffy is never seen afterwards. Chip cried for my wife's death. 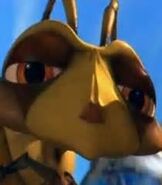 Add a photo to this gallery
Retrieved from "https://antz.fandom.com/wiki/Muffy_(Antz)?oldid=4468"
Community content is available under CC-BY-SA unless otherwise noted.